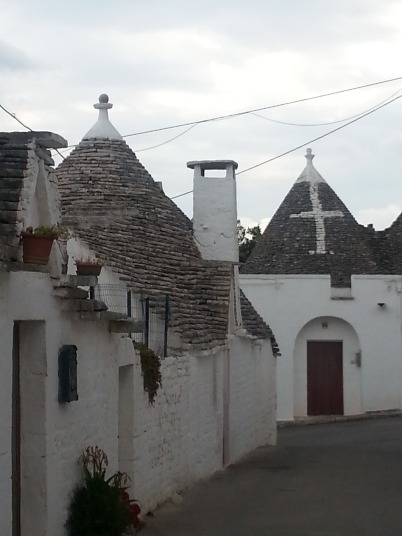 We’ve seen trulli, those cone-shaped houses characteristic of this part of Puglia, as we’ve been driving around. One of the nearby towns, Alberobello, is famous for its concentration of them. It’s become very much a tour bus destination, so we figured we’d want to get in and out early. We had a lovely drive on the roads connecting the towns–from Ostuni to Cisternino, to Locorotundo, and then into Alberobello. You can see many of the multi-coned trulli have been renovated into fancy vacation homes, but also many that are gently crumbling. 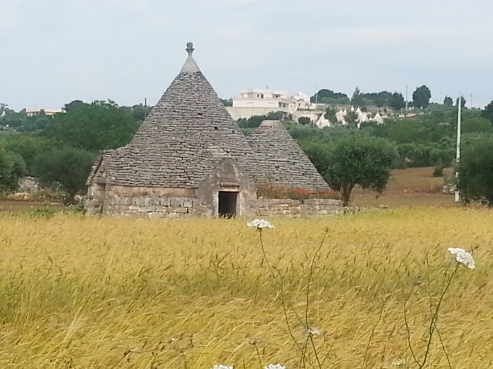 We easily found free street parking on the main road just past the train station, and walked into the trulli district. There are actually two hillsides covered in Trulli–one has been transformed into shops selling every sort of trulli-themed made-in-China junk you can imagine; the other is more residential and much quieter. Guess which we preferred? There is also a sweet little public garden between the hills, a nice place to sit. We wandered around, snapping photos. Ominous rumbling in the sky prompted the shopkeepers to quickly haul their junk indoors, and soon enough the rain started. 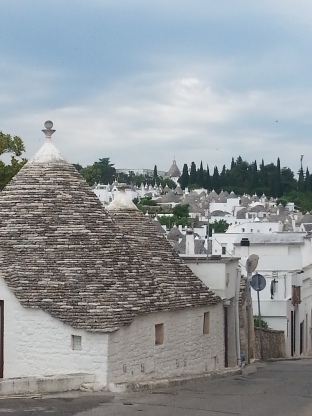 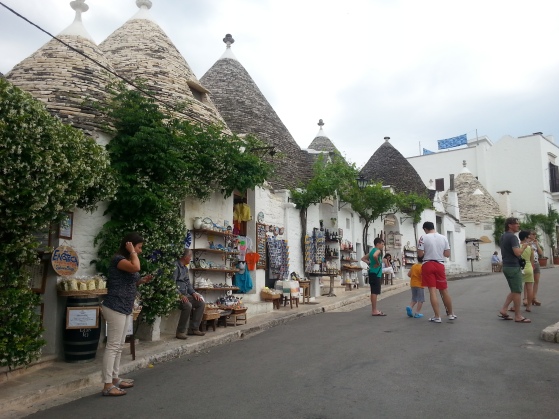 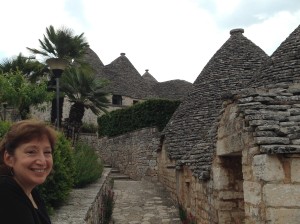 Back in the car, we considered our options. We weren’t far from the Grotte di Castellana, caves that I’d heard were interesting to tour. I was a bit hesitant, what with my lizard-brain fear of slipping on slopes, but figured, I’d just clutch Larry when needed. http://www.grottedicastellana.it/en/the-caves/

You can take a long or short tour; we opted for the short. The next one in English wasn;t until 1, so we tagged along on the next one in Italian. You first walk down an immense staircase, which gets wetter as you descend. We entered into a huge cavern, with a hole in the ceiling letting in light. This is the only place you’re allowed to take photos, which everyone but two gentlemen complied with as we were led through the caves. It really was magical, with the stalactites and stalagmites highlighted by lighting as you walk from large to small spaces. 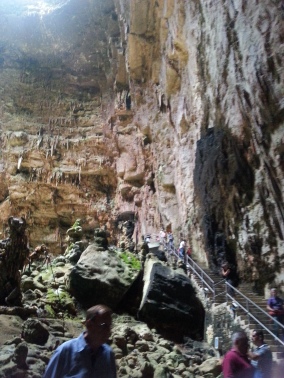 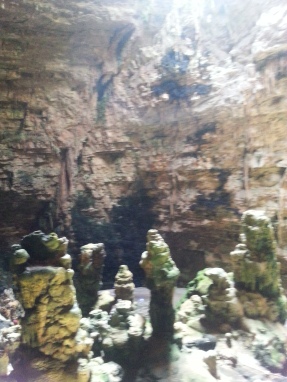 And happily, there is an elevator to get you back to the top, hooray for my knees!

The area around the caves is filled with cheap cafes and stands selling trinkets, we decided to get far away before looking for lunch options. We ended up in Cisterina, found parking just outside the old part of town, and walked in. Spooky quiet, as shops were closed for lunch, and probably half the restaurants a well. It’s a charming old place, with white houses and tiny alleyways. 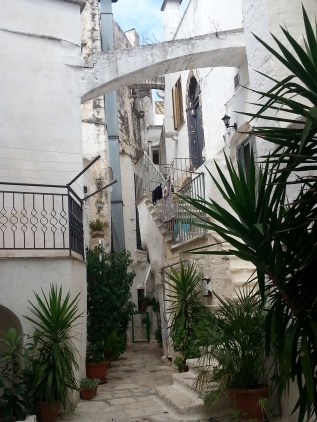 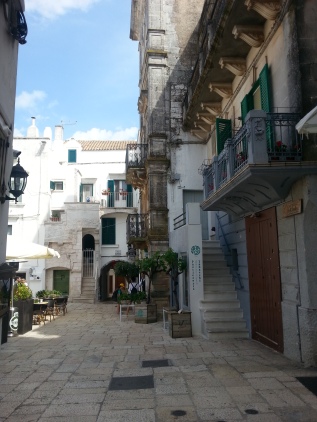 The town specializes in butcher shop-restaurants, where your selections are grilled and served.  We found an allyway table at Trattoria Bere Vecchie, just because there were good smells coming out of the door. We didn’t want a huge lunch, so ordered an antipasto of fave y chicoria (mashed favas topped with sautéed chicory, a popular dish here, classic poverty food that tastes great), then a mixed grill for one, and a contorni of grilled vegetables. We loved everything-the mixed grill had two kinds of meat rolled around fillings, pieces of lamb, sausage, and delicious livers. Good stuff. 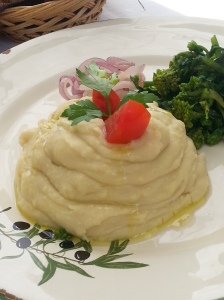 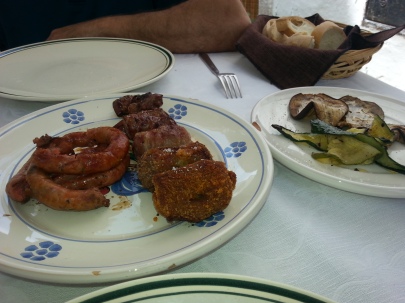 After lunch, we explored the back roads for a while, enjoying the scenery. My map has scenic routed outlined in green, and its fun to just follow those. 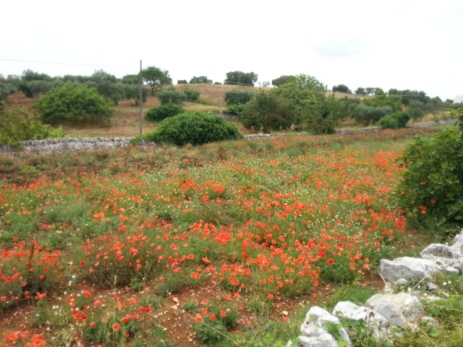 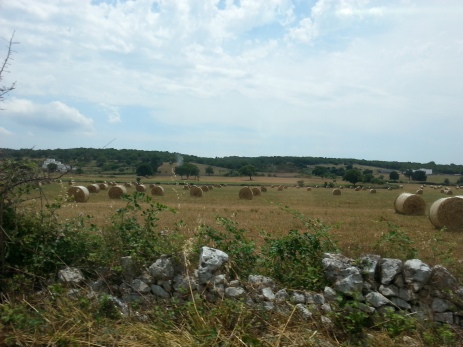 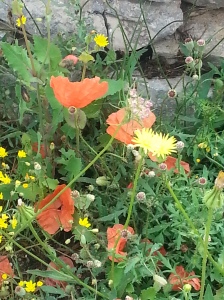 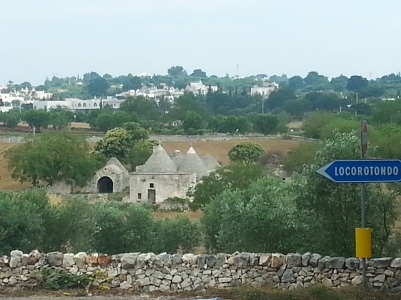 Back home, we stopped at one of the guys selling cherries from a truck. He kept adding more and more to the bag in spite of Larry’s protests–“it’s a gift!” (probably his boss doesn’t want him bringing a ton of cherries back!) Anyone want some cherries? What I wouldn’t give for my canning equipment. 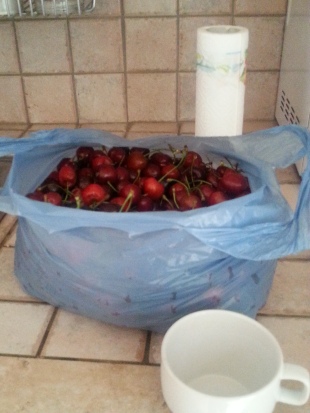 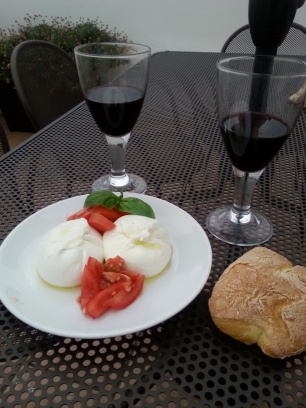 One thought on “Over and Under the Valle d’Itria”