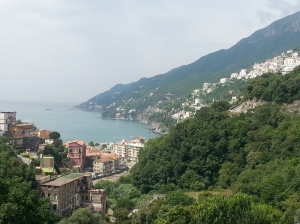 Thursday morning I managed to convince Larry that schlepping down to Vietri sul Mare would be just the thing. “What’s there?” My mumble of “ceramics” got me an eyeroll. Yes, we’re traveling with two carry-on sized bags. No, I do not need any more Italian serving platters. But hey, I can get those cute little ceramic number tiles for the front door! They’re little, right?

We decided to try taking the coastal route past Battipaglia (which I think means “ugliest truck-stop town in the Cilento” in Italian) instead of the crazy-making A3 through Salerno. We turned toward the sea, driving through what I dubbed “Tomatoland.” Fields and fields of tomato plants, with the occasional cornfield or used car graveyard thrown in.

Once we reached the coast, we went through a few kilometers of sad looking lidos and empty hotels before emerging into the chaos of Salerno during rush hour.

Salerno is a big city, and it seemed that those who were not trying to edge their cars in front of us at intersections were walking right in front of us. The good news is that traffic was so thick it all took place in slo mo, so at least we got to enjoy the show of elderly ladies dragging their shopping carts, people drinking espresso in cafes, and shop owners leaning in doorways. It’s a lively place, with some attractive streets and a nice waterfront walk.

We eventually emerged and followed a bus around a 180 degree turn to get to Vietri sul Mare. It’s an old ceramics town, where much of the stuff sold on the Amalfi coast is produced. It’s the southernmost town on the Amalfi, so I can tell my MIL I went to the Amalfi Coast. (she cannot understand why we’re not staying there).

We immediately pulled into the small parking lot the road dumps you into when you reach Vietri. Nice view from the parking ot, huh?

And yeah, they sell some ceramics here.

We walked round the small streets. There are many ceramics shops, but also everyday stores, and there didn’t seem to be many tourists yet. We poked around the shops, seeing lots of differences–many sold what are obviously mass-produced pieces from the big factories, but there were also some independent craftspeople working in some of the shops. I bought number plaques for the house, and then wandered into a shop because of the delicacy of the painting on the ceramics in the window. She had a large multisectioned antipasti platter I adored, but there was no way we were going to be able to carry it home. Instead I got a pretty plate, white with a lemon pattern in the rim, edged in blue. (sorry, it’s embalmed for travel now, photo later)We also learned the Italian word for bubble wrap. 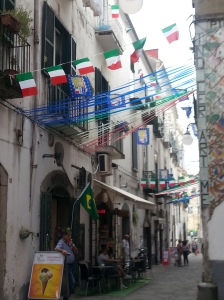 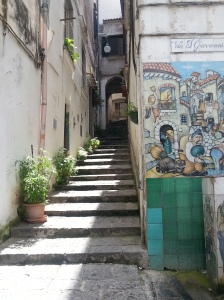 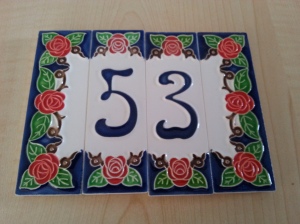 Drove back up the coast (took the A-3 this time) and got off in Capaccio. There re many hotels, lidos, agriturimos, and restaurants in this area, to take advantage of visitors to the beaches and Paestum. We followed a sign for a restaurant down a small road, and found it open for lunch. We shared a primo of a plate of pasta, sauced with chunks of fresh tuna, zucchini blossoms ad a few shrimp. The secondo of bufula tagliata (Makes sense that the rest of the buffalo should be of use occasionally) was overcooked to my taste, but that seems to be how meat is generally cooked in southern  Italy. Also got a nice plate of grilled vegetables. 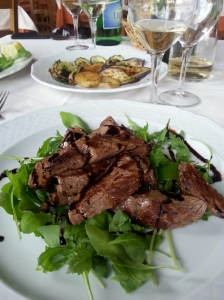 By now the heat had abated, so we decided to head over to Paestum. The GPS led us to the ancient walls, but instead of following the signs to the site, it led us around the walls and then through a gate and down a little road that was blocked at the end. We parked under a tree, and saw that the site was just across the street. We entered the museum to pay, and decided to visit the museum first. This was a good orientation, with displays chronicling from the prehistoric times, through the Greeks, the Lucanians, the Romans, and until the area was abandoned in the middle ages, probably because of  malarial conditions. Lots of relics found on the site, and signage in Italian and some English.

Afterward we wandered the site, somewhat aided by the crappy audioguide. Signage at the site is in very bad condition, so unless you have a printed guide you’re pretty much on your own. 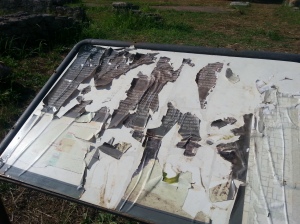 The three temples are of course amazing, but also of interest are the remains of the Roman homes, baths, and meeting places. There were perhaps another 20 people on the large site, and most of the time we didn’t have anyone else in view. After the crowds of Pompeii, this was a treat to experience the place in the quiet. 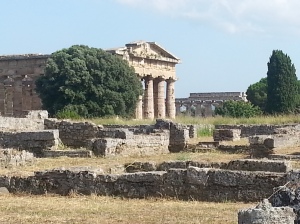 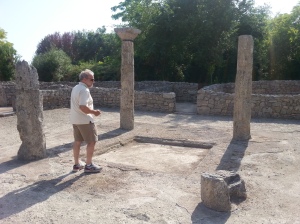 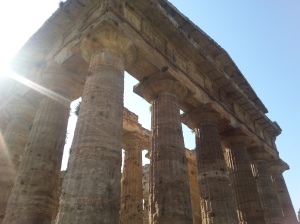 Back home for sunset on the beach, then cooked up some more fabulous vegetables for dinner. 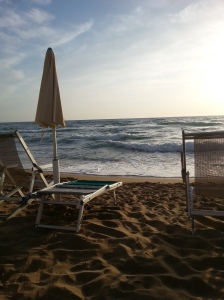