Tuesday morning we met up with David Lown, an art historian living in Venice who runs a site and blog that is a great resource, A Guide to Venice. We negotiated our way through the hoards swarming towards San Marco, feeling rather like salmon pushing against the oncoming current. A brief history lesson along the way highlighted how ignorant I still am about Venice.  We turned inward at Santa Maria della Pietà, the foundling hospital and school. Interestingly, many of the girls were highly trained in music,(Vivaldi worked here)  and the orphanage became so renown that it became necessary for the Pope to install a plaque threatening excommunication for parents who abandoned children there who could otherwise provide for them.

We continued through the quieter reaches of Castello, pausing to find hidden courtyards with wellheads, plaques, churches, notable buildings and bits of history we’d otherwise never have seen.

Arsenale, and a Bocca di Leone (denounciation box) on a church 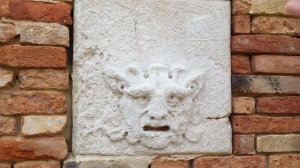 The narrowest street in Venice, a hedgehog as part of the Rizzi family crest on a palazzo 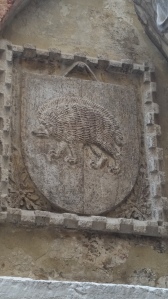 Palazzos on streets so narrow its impossible to get a good photo, secret courtyard gardens, flowers decorating a balcony as the palazzo crumbles 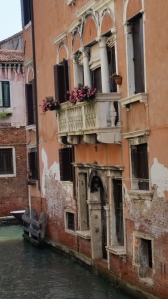 So much of Castello has emptied as the population has shrunk. You pass by empty storefronts, deserted streets,  crumbling buildings, a palazzo disintegrating into a rio,  and the occasionally overwrought reconstruction turned into luxury hotels.

Here’s the 16th century Sotoportego de la Corte Nova, a tiny chapel built to protect the residents of the courtyard from the Plague, also invoked as protection from bombing in WWI.

And the lovely courtyard of San Francesco della Vigna. 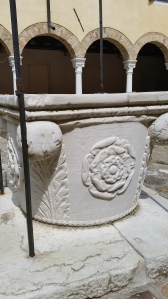 We continued into northern Castello and then  Cannereggio.

Amusing to see the plaque on the Colleoni sculpture depicting the supposed anatomical representation of his manliness in battle. 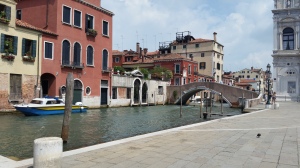 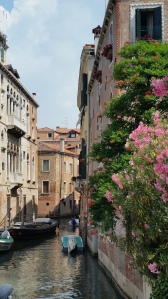 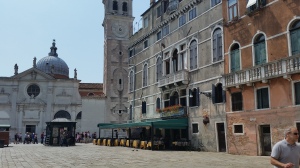 We reentered present day Venice among the tourist throng, and said our goodbyes. I highly recommend walking with David–he’s thoroughly engaging, passionate and knowledgeable, and his rates are a good value.

We decided to head up to the Giardini for the Biennale. First, some wine and sandwiches at El Refolo. As we were eating, I saw a cruise ship raw staggeringly close to the street. Criminal that these ships are allowed anywhere near delicate Venice. 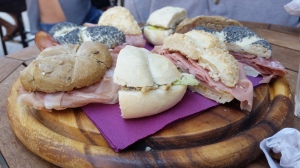 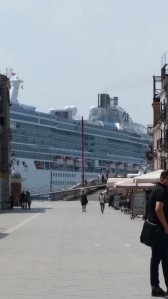 Saw a bit of the Biennale, but frankly did not have the energy to weed out what might appeal. A thunderstorm broke, so we huddled in the bookshop before heading back home.

Threw together a spaghetti carbonara for dinner.

One thought on “Walk Through Time”