One of the sights in Istria is the Limsky Kanal (sometimes called the Lim Fjord, although its more of an estuary than a fjord, as it wasn’t formed by glaciers. Think of it as a very deep ditch that empties into the sea.) We wanted to take some local roads, so Larry fed the destination into the GPS with instructions to avoid toll roads.

I think we succeeded. Just out of the Rovinj city limits, we turned onto a gravel road that wandered through olive groves, zucchini fields, and the occasional junkyard. Just around a turn I spotted an old building and we jumped out to see what it was. According to the sign, it is the church of St. Thomas the Apostle, an 8th-9th century church, one of “the most significant of the Istrian Field Churches.” Open to the sky now and surrounded by birdsong, weeds and wild thyme. 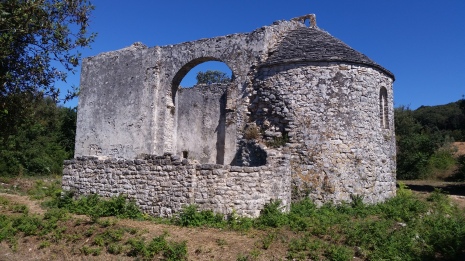 We drove on, encountering the occasional biker and luckily no other cars on the narrow road. We got onto another road that Google Maps didn’t acknowledge, and crossed through some heavy forest before emerging in a village. 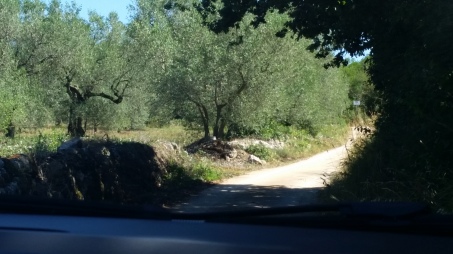 Eventually we got to Limski. The road leads to the end of the Kanal, where there are two restaurants, a souvenir stand (because you can’t go for 1 kilometer in Istria before buying honey, grappa or truffle products), a couple of kids in pirate hats, two tour buses, and a guy selling tickets for boat rides. We had considered taking the boat from Rovinj to the Kanal, but as it involved stops at a “Pirate Cove” and took four hours, I figured it would drive Larry to homicide. So we took this cute one-hour boat, with a cheerfully casual captain who showed us all the fish, oyster, and mussel farms along the quiet shores. 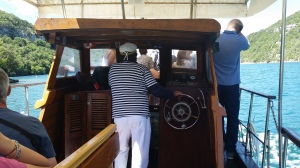 We ate lunch at one of the restaurants, the Viking. I have no idea why its called that, were the Vikings ever in Istria? In any case, we started with a half dozen of the oysters. We both decided we preferred the brinier tang of our east coast oysters. The platter of mussels we had next was fantastic though, as was the seafood risotto we shared. 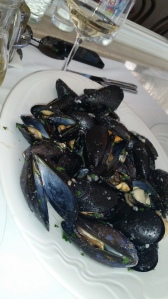 The clouds had cleared, so we headed back to the beach we’d found earlier in the week. Just lazing on our rental-supplied mats (necessary, as Istria’s beaches are rock and gravel) reading and snoozing. Leftover linguini and shrimp for dinner, leftovers at home are never this appealing.

2 thoughts on “Slowing Down”