Remarkably easy flight over the Pond, what with TSA-Pre and the flight being 70 seats empty. I slept for about 1/2 hour, but got a lot of knitting and reading done. A simple matter of getting on the #4 Air France bus at Charles de Gaulle, and then a five minute walk to the Ibis near Gare d’Lyon. Like all Ibis hotels, it has a friendly staff and clean, plastic-y rooms. Just fine for a night.

Larry and I walked over to the Richard Lenoir market, and enjoyed this first bit of France. We slurped down some fabulously briny oysters at a fish stand (now this at home would make grocery shopping a hella lot appealing), and bought a few things for a late picnic lunch in our room–bread, pate, cheese, tomatoes and figs, and wine.

Took a short nap, then a venture out for SIM cards and a walk. We wanted a light dinner, so found a neighborhood creperie where we had quite decent galettes and enough wine to make sleeping a given. Les Embrun, 8 Rue de Lyon.

Monday morning we walked over to Gare d’ Lyon and got on the early train to Avignon. Just three hours later, we were in Provence, a trip which would have taken about seven by car. Picked up the rental car, and drove up to Vaison-la-Romaine, passing golden vines and the occasional village and strip of car dealerships. 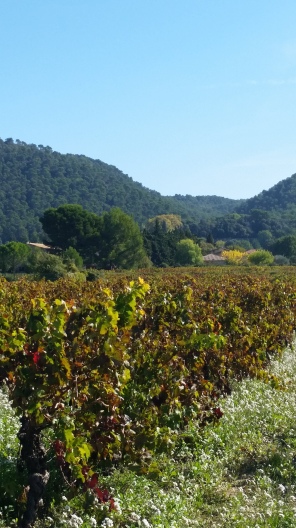 We parked in the lot at the Cathedral, and our landlords came to collect us, with triple kisses all around. Colette and Jean-Claude are the French grandparents you never knew you had, warm and charming. The apartment is opposite the Roman ruins, with a killer view down on them from the living room and bedrooms. A good kitchen, new bathrooms, and cute terrace, all decorated in Grandma style, comfortable, a bit fussy, but cute. 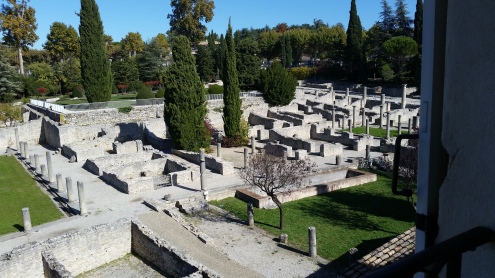 A nice lunch a tLe  Comptoir des Voconces, salad for me, carpaccio for Larry. We shared a chocolate mousse, Larry’s happy place. Vaison has a “modern” town surrounding the Roman bits, and a Medieval area on the hillside over the river. The modern part has many shops, restaurants, and was lively even on a Monday, generally a sleepy day in France. A bunch of tourist-oriented places, but very much a real town, especially now, out of season.

Ventured out to the grocery store for a few things for dinner, then made a roast chicken with rosemary and garlic, potatoes and salad. A good first day.

3 thoughts on “Paris and South”