Wednesday morning we drove into Avignon, parking in the Oratoire lot by the river. We walked the short distance to the Palais des Papes, that enormous pile built in the 14th century. Over the centuries most of the elaborate decoration has been lost, but there are still a few frescoed rooms, some evocative stone carvings, and the grand sense of scale remaining. We rented audio guides, which we thought well worth the money. There are also explanatory cards in English and some video in some of the rooms, but the audio guides have a lot of rich detail to help you make sense of what you’re experiencing. There is also a lot of historical explanation, good for those engineers who somehow got through university without a two semester Western Civ course and didn’t know why there was a Pope’s palace in France.

You aren’t allowed to take photos in the frescoed rooms, so here’s some I found online. 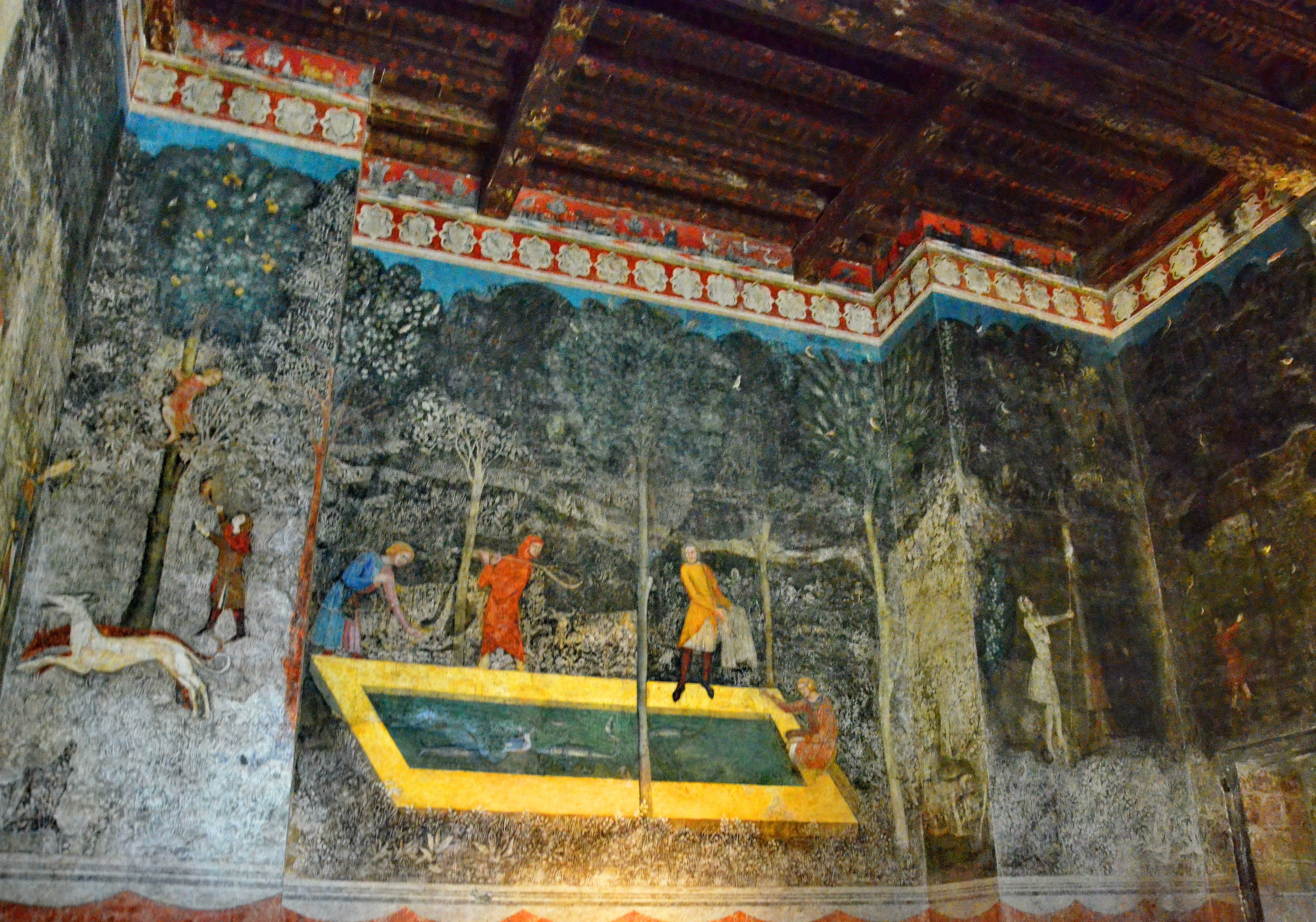 And here are some things that caught my fancy. There were very few other people there during our morning visit, I can imagine that’s not the case in July.

After visiting the Palais, we walked to the nearby park on a hill. The Mistral was blowing hard, and the chill made a walk more of an adventure than I was looking forward to, so we strolled around the streets instead, popping into buildings that caught our eye–and at one point, nearly being hit by falling plaster from some workmen repairing a church window.

We had made lunch reservations at La Fourchette. It was good that we had, as the place was packed, mostly with local business people and older couples enjoying a late lunch. I started with a plate of pieces of lightly cured salmon surrounding lentils over an herb sauce; and then went to a daube of beef with olives. Larry went for the brandede, very delicate and served with several vegetable salads; and followed that with duck breast. For dessert, I had a profiterole, and Larry a plate of three little chocolate desserts. Wine and coffee, and two hours went by. Very nice place with good food.

Given the wind, we thought a museum would be a good idea. We had the Petit Palais almost to ourselves, going through rooms of Romanesque sculpture and then Italian art from the middle ages through the Renaissance. It was a lot of repetition of rather dour religious paintings but interesting to see all the different styles and differences in composition and technique. Sadly, all the Botticellis are on loan to one of the museums in Munich. I particularly loved a series of 15th century paintings illustrating Les Amours de Pasiphe, with everyone in Renaissance clothing and fantastic and gory details.

As we were walking back to the car, we spotted an elaborate doorway, and went to peek inside, It turned out to be the Palais du Rhone, a 15th century mansion that was eventually lived in by Jeanne de Flandreysy, who in the 19th century collected pieces to preserve the Provencal culture. It’s a quirky place, with a huge stairway crammed with paintings, and several furnished rooms upstairs.

We enjoyed Avignon, and with its many museums it’s a place we’d like to return to another time.

We collected the car and drove North. Larry wanted to get some good photos of Mount Ventoux, so we kept going, eventually driving through Le Barroux, getting glimpses of the Chateau on the hill, going past Malaucene and Crestet, and driving along golden-leaved trees lining the road. It was getting close to 6, so we bookmarked the towns for visiting on another day.

I spent some time cooking the sausages and lentils I had bought but we were so full from lunch we just had a taste. So we have dinner all made for another night.