Wednesday morning we headed out early, just in time to see the neighborhood firefighters out for a run. 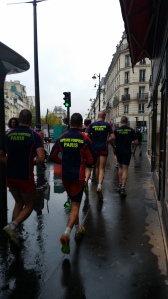 We got ourselves to the Orangerie just as the museum was opening (one of the only Paris museums that opens early, at 9). In spite of visiting Paris 8-9 times (we think), we’ve never been. The sky was heavily overcast, so I snapped the obligatory photo of the Eiffel Tower reaching into the sky.

We opted for sharing an audioguide and first headed to the two rooms of Monet’s Waterlillies. I’d seen one of the panels in New York, but experiencing the covered walls as they’d been designed to be seen was something else entirely. It was particularly interesting viewing the paintings at a distance, and then getting closer to see the texture and layers of color.

Just about the only others at this hour were a large group of Nordic-looking teens, heavily bored and absorbed in their hormones and cellphones. Parents, save your money. 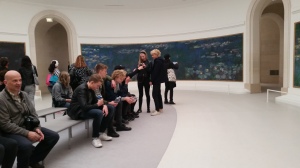 I again decided that Renoir isn’t my thing (to me, his work is like Hallmark cards), but greatly enjoyed the rest of the Guillaume collection of works by not only painters I was familiar with like Picasso, Matisse and Cézanne; and others from the early 20th century that I didn’t know. There was also a large exhibit of works by women photographers that was interesting, with the later works exhibited at the Orsey.

I’d done a bit of research on a good place for lunch, and we walked across the Tuileries and up rue de Richelieu to Zebulon. A modern space with tables actually set so you aren’t sitting in your neighbor’s lap, and an excellent value 21 euro 2-course menu. We started with a dynamite vegetable gratin, and then pork cooked with mushrooms and new potatoes, just as delicious. Larry had to order dessert, which was a multi-layered crunchy thing covered in deep chocolate, with a zippy citrus ice cream. Yeah, he liked it. I’d definitely co here again to try out the rest of the menu. 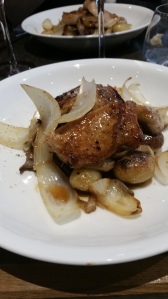 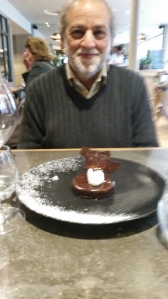 Walked partway back stopping along the way to sightsee a bit in the Marais. Still the junk wholesale jewelry shops along the avenues, and now plenty of too-cool-for-you clothing shops selling two turquoise blouses and size 00 pants, and art galleries with bored staff elegantly lounging.  Rested up a bit on a bench in the lovely Place des Vosges, and then back to the apartment around the corner. 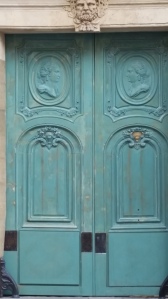 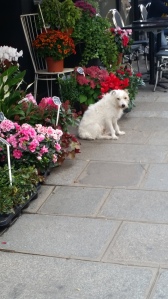 Later we headed up to the 9th to meet up with Paris pals N and D at a wine bar, Le Bouclier de Bacchus. Lots of talk and laughter, plates of charcuterie and cheese, and more than a bit of wine. Heading out, we met up with friends of theirs, who invited us all up to their apartment. I do like Armagnac.

On the way home, we ducked into a wine bar/tapas place around the corner from our apartment. We were the oldest people in the place by about 25 years, I don’t know who was more amused. As Larry commented, “I’ve had MY beard longer than you’ve been alive.”