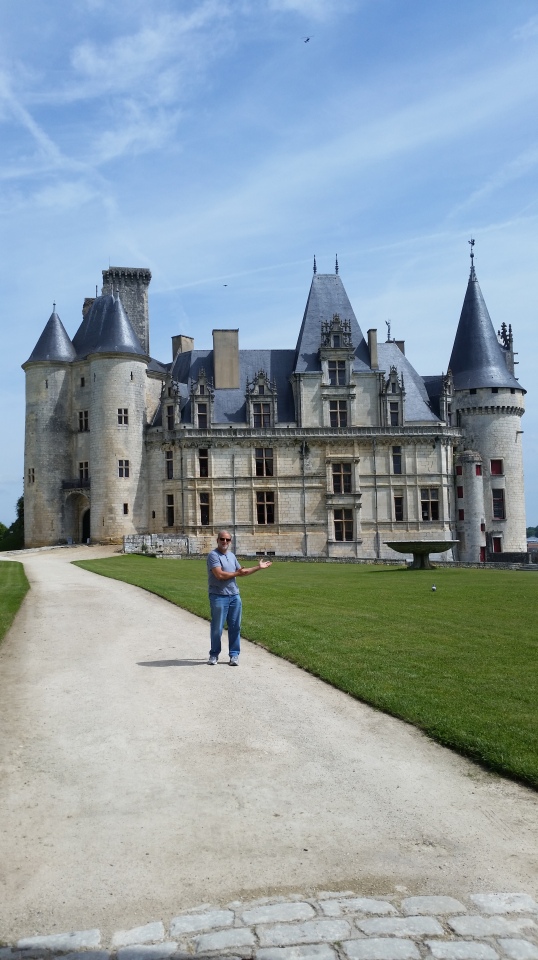 We wanted to stay closer to home after yesterday’s long drive, so decided to go to the Chateau La Rochefoucald on Thursday, a beautifully sunny day. We put together a picnic, and drove over to the town La Rochefoucauld. The attractive and lively town has a main street with more shops than most of the small towns in the area, and we bought a baguette and a slice of pate. The Chateau sits on a hill at the edge of town, and when we arrived, there was a sign on the door saying “at the library, back in 15 minutes.”

We waited on the immense lawn beyond the moat with just a few other people, and finally our hostess opened the door and let us in. She had a leaflet in French and English to give out, and visitors can wander the public rooms of the chateau. Part of the chateau is still lived in by the family, and they rent out two rooms as a B&B, pretty cool.

The original keep (part of which is still standing, though under repair) was built in the 11th century, with the towers and front portion built in 1350, then extended again a century later. The flanking wings were added in 1520, and more rebuilding has been done over the centuries. It’s a striking place, and it is great fun to wander the public rooms, furnished much as they were in the 19th century, and well stocked with family portraits, and more modern photos and memorabilia. 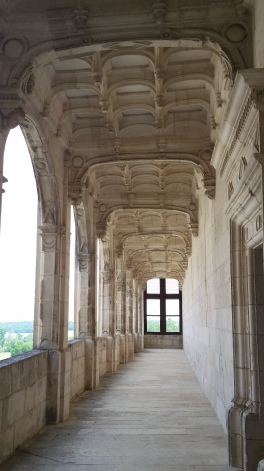 Love the ceiling details, and this fantastic renaissance style central staircase, said to have been built according to the drawings of Leonardo Da Vinci given to Anne de La Rochefoucauld by the king of France

The downstairs kitchens have the most enormous hearth I’ve ever seen. 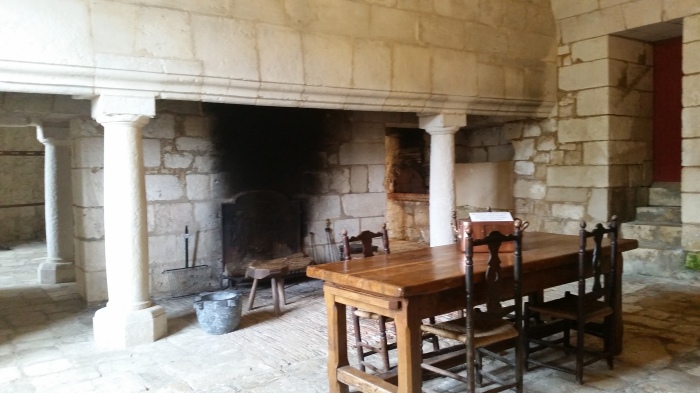 And here is my favorite room, a little boudoir with painted portraits of chateaux and properties owned by the family, painted in the 17th century.Imagine the concentration of wealth amidst the poverty of the overwhelming majority. Let them eat cake, indeed. 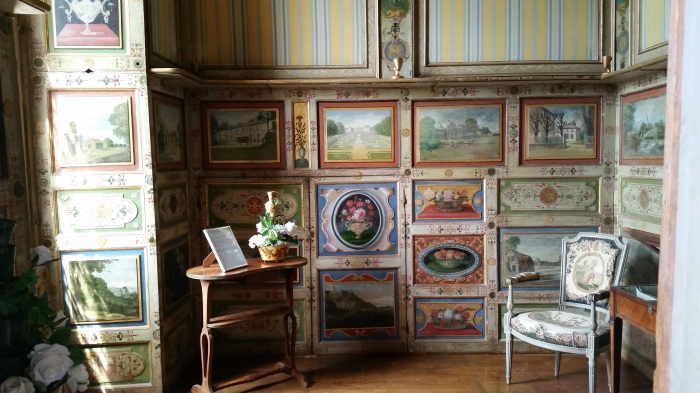 At 1 pm, our hostess met us in the top floor library, where we saw a portion of the library, with books dating from the 18th century. We were also taken to the Map Room, with artfully displayed old maps.  And even more cool, the archives room, containing documents relating to family holdings and business going back centuries. Here our guide is showing a ledger from 1572.

We sat below the chateau in a little park to have a picnic lunch, sipped wine and briefly napped in the sun until I was woken by someone’s exuberantly friendly dog.

We aimlessly drove around a bit following historical market signs, and chanced into the village of Coulgens, with its 11th century Eglise Saint-Jean-Baptiste. The sign outside mentioned murals inside the church, so we went over to the Mairie, got the enormous key, and went inside. Portions of the 14th century wall paintings have been uncovered, some highlighting the story of Saint Barbara. Just lovely.

For dinner that night, we reserved a table on the patio at L’Esille, the place where we had such a wonderful lunch a few days previously.We both ordered the least expensive menu.  I started with oysters, then went on to stuffed squid, and finished with a light dessert of sauteed apples and sweet cream. Larry had fish wrapped in vegetables for his entree, then a really delicious pork stew flavored with ginger, and a chocolate mousse-sort of thing for dessert. Everything was good, but I thought our earlier lunch there far better.