Tuesday morning we hung around the house and Spello through the morning light drizzle. Larry and Evan took a long walk down, up and around town. From the top near the Rocca you can see the outline of where the Roman theater was. 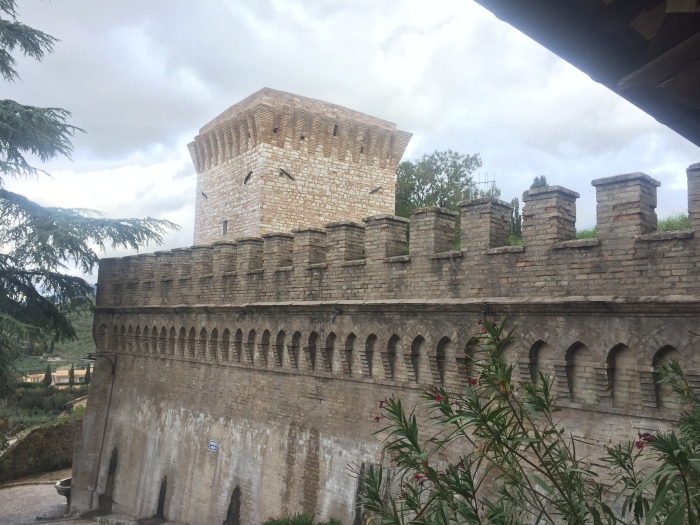 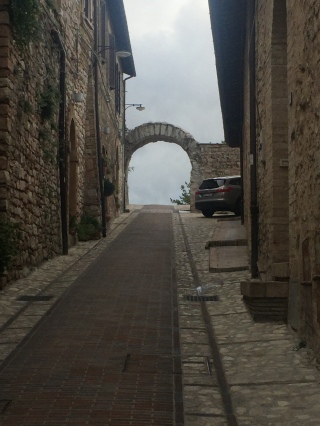 We had a nice long lunch at La Cantina in Spello. The antipasti of salads and the roast lamb were outstanding.

I had been wanting to get to the Palazzo Trinci, a Romanesque building that had been rebuilt in the Gothic style in the 14th century. We parked in the Porta Romana garage again, and walked through the pedestrian zone to Piazza della Republica. The Duomo has a gorgeous façade, with highly stylized Romaesque carvings. Find your zodiac sign above the door.

From the street, you enter into the Palazzo’s large brick courtyard, with a tall Gothic staircase to climb to the ticket office. (The staff were very accommodating about leading me to elevators. With no other visitors that we could see, it at least gave them something to do!) 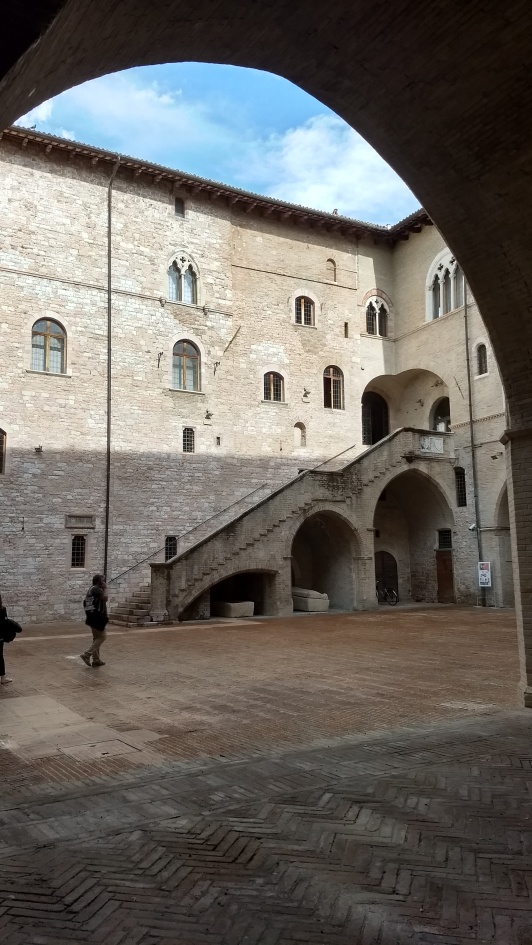 The top floor has a large picture gallery, which we quickly went through, not finding much of great interest. But after enduring a few rooms of dreary low-level religious art, you get tot he heart of the Palazzo–a series of rooms decorated in the 15th century with secular themes, very unusual. Documents discovered in the Trinci family archives led to the discovery of the artist, Gentile da Fabriano and his workshop. There’s a loggia illustrating the story of the founding of Rome, and up a little flight of stairs a jewel box of a chapel with the life of Mary. 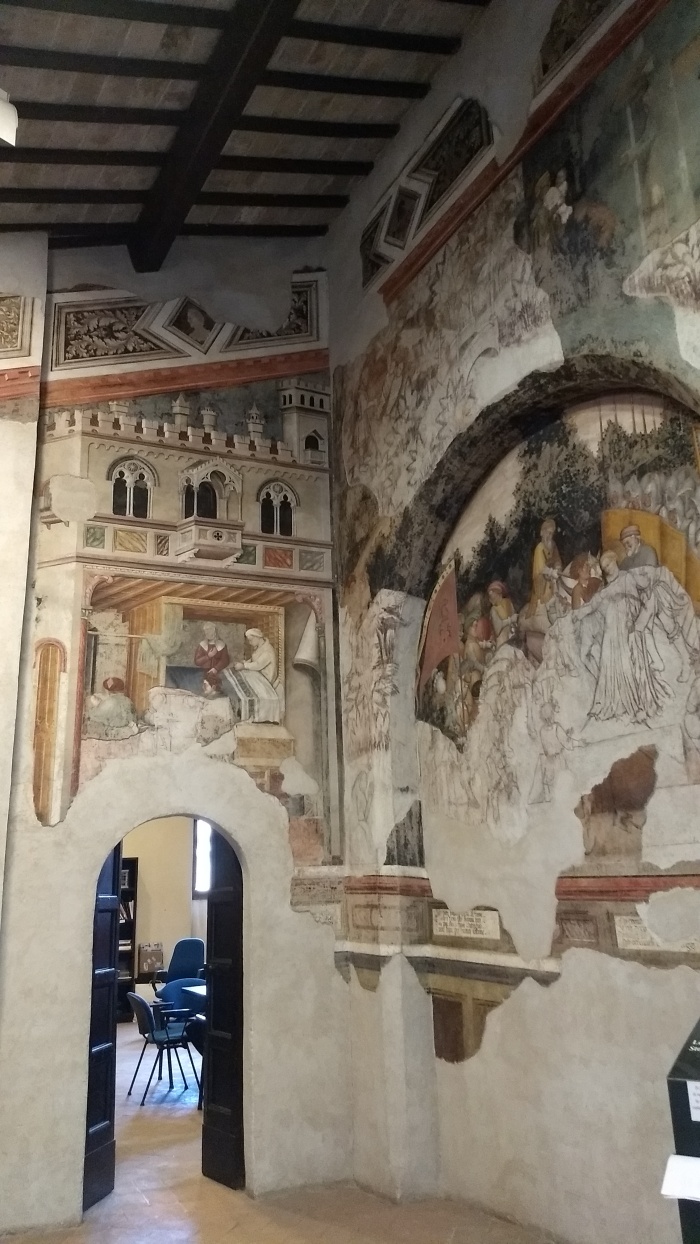 And then a fascinating room featuring the Liberal Arts on two walls; and the Planets on the others. (the people in this room were having a meeting–the only other people we saw inside!) The Liberal Arts are all women working at assorted tasks with props, it is fun to find Geometry, Arithmetic, Philosophy, Music, etc. 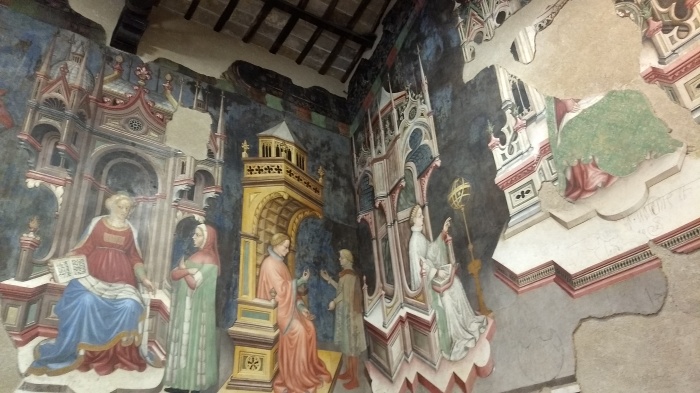 Here’s a corridor which leads to the Duomo. On one side are heroes from antiquity, and the other, Ages of Man. How’s this for a cozy room? Enormous emperors staring down at you. 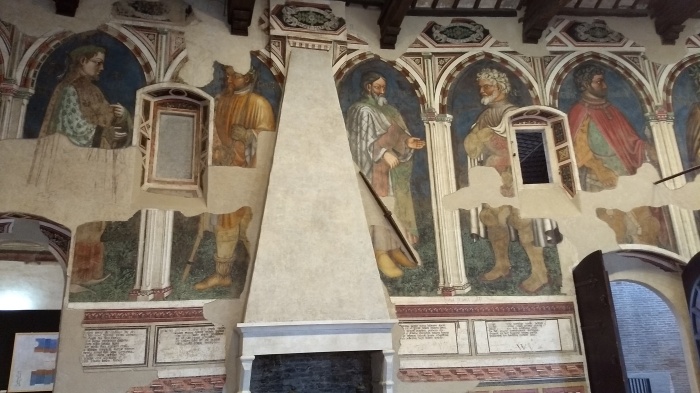 Downstairs are several rooms of Roman bits and pieces, a wonderful little gothic stairway with original geometric decoration (ask the staff to let you in there if it’s closed off), and black and white Roman floors in the basement. We also wandered and found a series of rooms about the Foligno Quintana, with a few fun videos of the parade and joust. 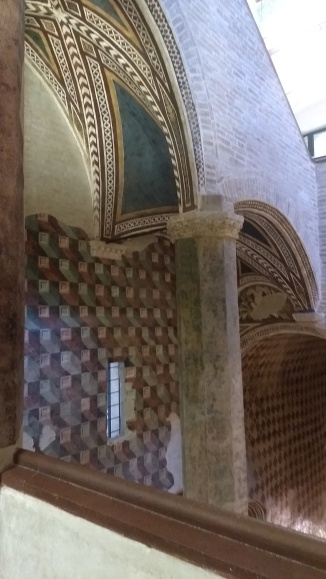 We walked out into the late afternoon, hearing nothing but Italian around us. Another marvelous regional museum, in a non-touristy town, with no one inside. Do go! 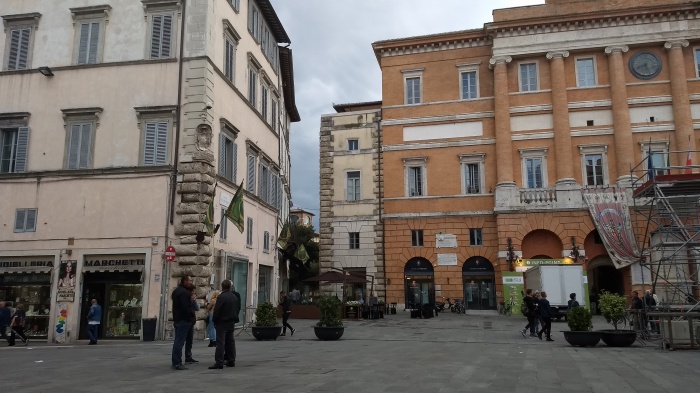