For my birthday, we thought it might be nice to have a brief countryside break. I love Amarone wines, so the nearby Valpolicella area seemed a good fit. An old Slowtrav friend recommended an agrituriso winery where he has stayed several times. I learned that they had recently opened a small restaurant on site that has been getting excellent reviews. Sold.

We knew a few days earlier that Italy would be having a transportation strike on Friday. The vaporettos would not be running, so we would need to walk to the train station, not a problem. What we were unsure of was how many trains would be cancelled that day. As it turned out, just a few were cancelled. So about 100 confused people had gotten off trains at the station, waiting ot the docks for vaporetto that wouldn’t be coming. 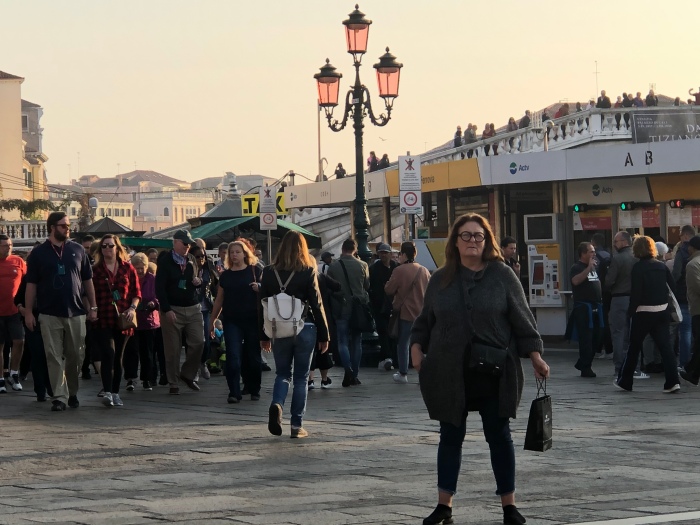 In Beautiful (not) Mestre, we picked up our rental, a tiny Fiat 500. We started driving west, the highway lined with industrial plants and nondescript office parks. Ah, here are grapevines finally, in the valley floor and climbing hills. We first stopped in the town of Soave. Well preserved walls partially enclose the old town, and climb the hill to the Castello at the top. You can climb the rough steep hill too, or do like we did and find the hidden road to the top. Pretty views up there. 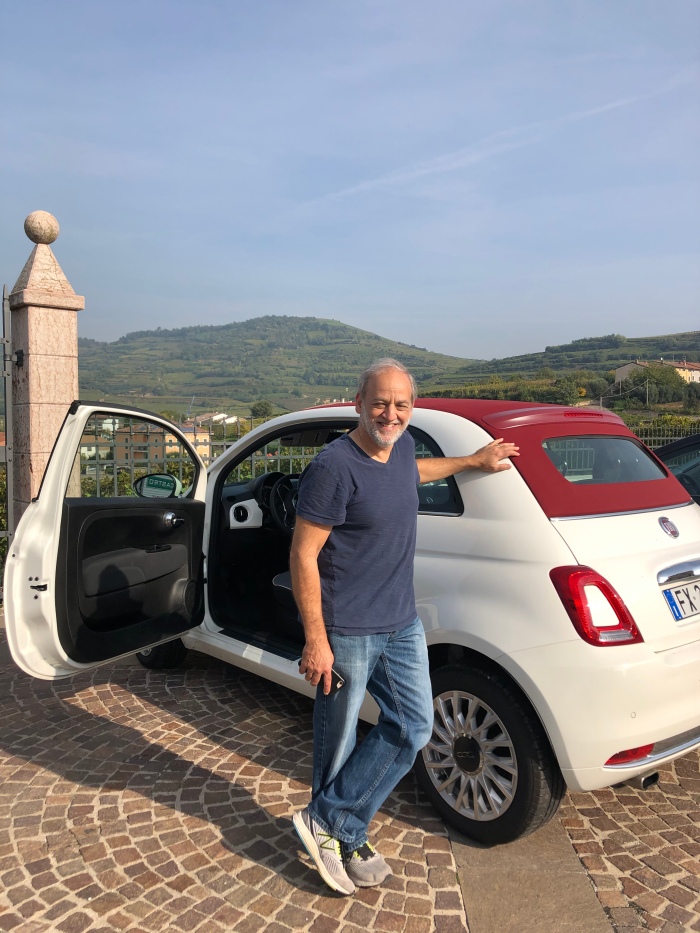 Whoops, rookie mistake, the Castello would be closing for lunch in 30 minutes. We poked around Soave a bit, and then got to the serious business of finding a place for lunch. 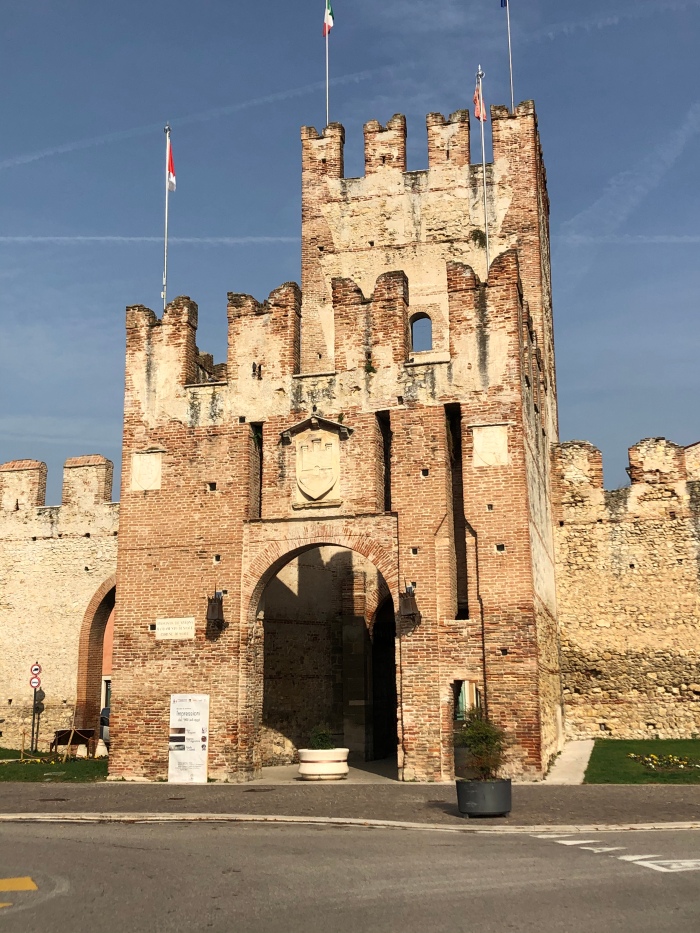 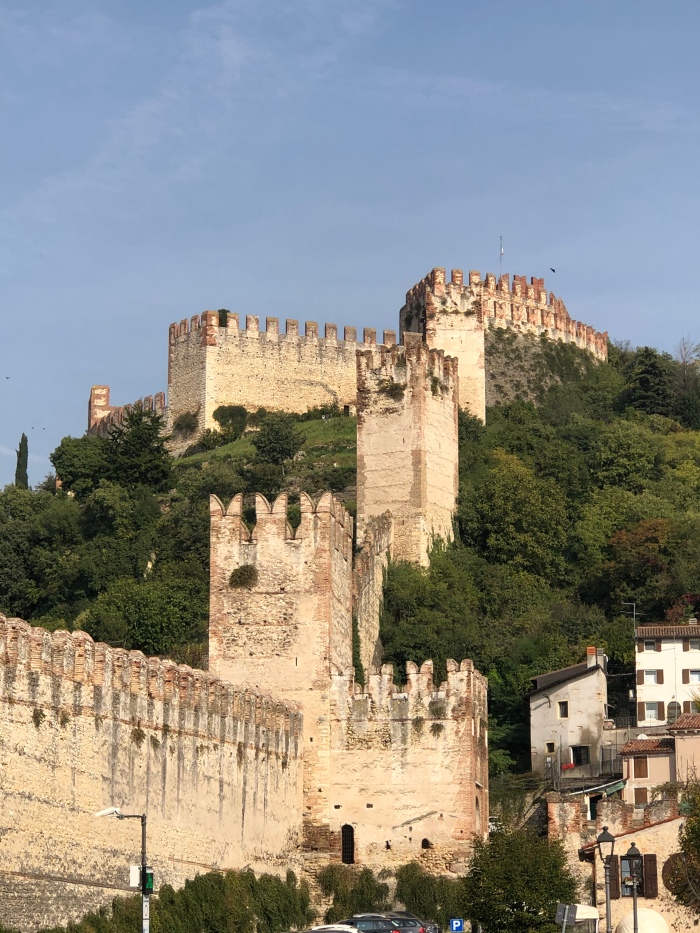 Google map recommendations and TripAdvisor Italian (sometimes more reliable than reviews in English) pointed us to Osteria no. 1, in the Volpecella town on F. . Very lively, with a dapper owner singing along with the radio, good smell from the kitchen. Food was slightly gussied up traditional. Mmm, glass of Amarone. We began with tortellini stuffed with radicchio, honey and smoked cheese. Really good. Then pork with fried leeks on a pumpkin purée for Larry, and beef cheeks in an inky dark Amarone sauce for me. 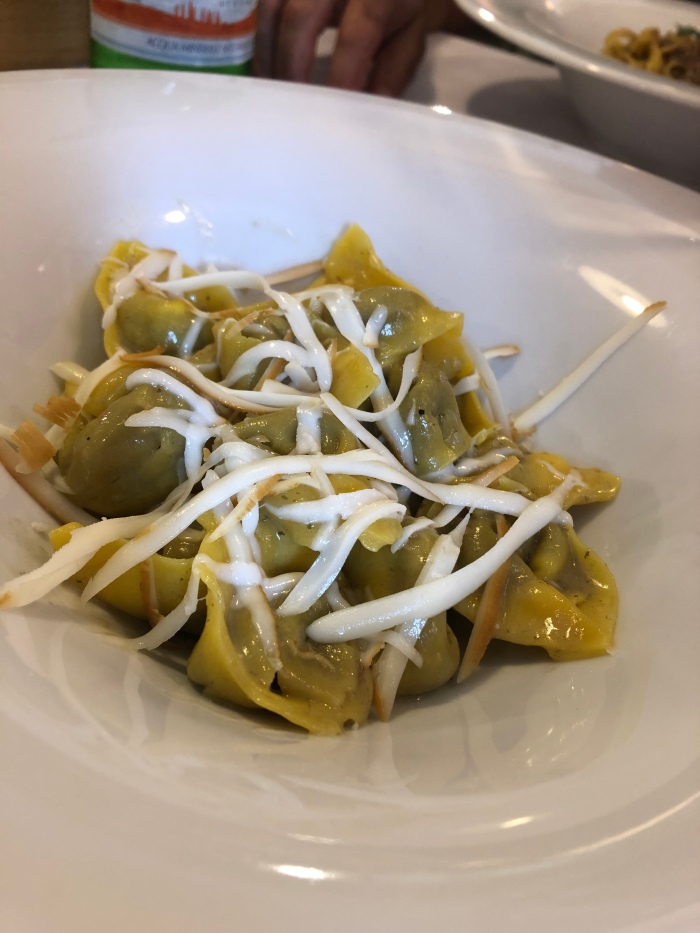 I love Romanesque churches, and had noted some in the area when I was doing research. We found two beauties, each closed up tight. I’ve noticed that these old churches in France usually have a key at the local Marie (town hall) or a note on the door with phone number of key holder, who is usually delighted to show you the village’s pride and joy. But in Italy, you’re out of luck unless the key holder is cleaning. One of the churches was in a cemetery, where graves all sported flowers and decorations for All Saints Day next week. None of the ladies fixing up graves knew who had the church key, ah well. 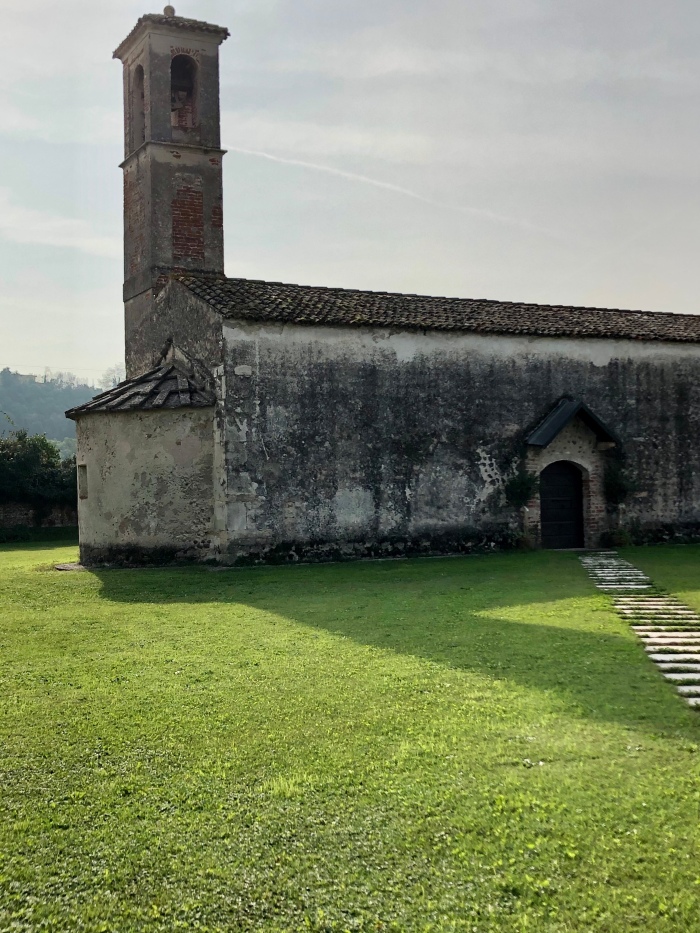 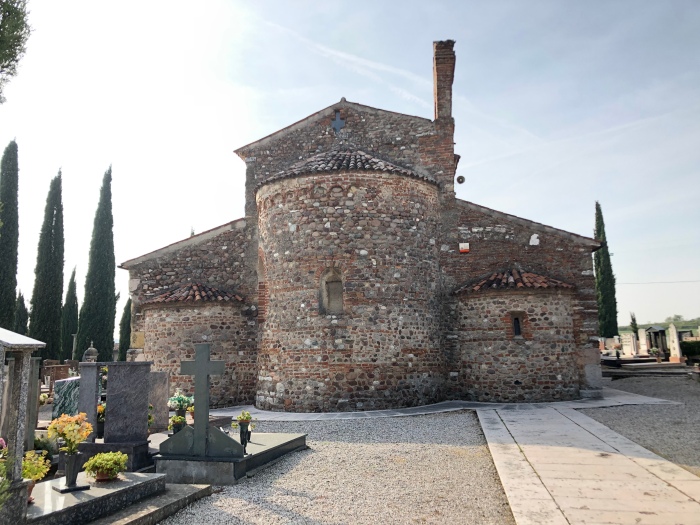 We then drove to Massimago, the winery-agriturismo Ian had recommended. A beautiful building and grounds, up on a hill surrounded by vines and forest. We arranged for a tour and tasting later that afternoon, checked into our pretty room, and went to read on the patio by the pool.

With Ariana from the winery, we climbed the steep hill terraced with grapevines, learning about the five major grape varieties grown in the region, the wines they produced, and drinking a glass of fresh white wine halfway up. Massimago is an organic winery. The grapes have been grown here for decades, but the family has only been making their own wines for about 15 years. 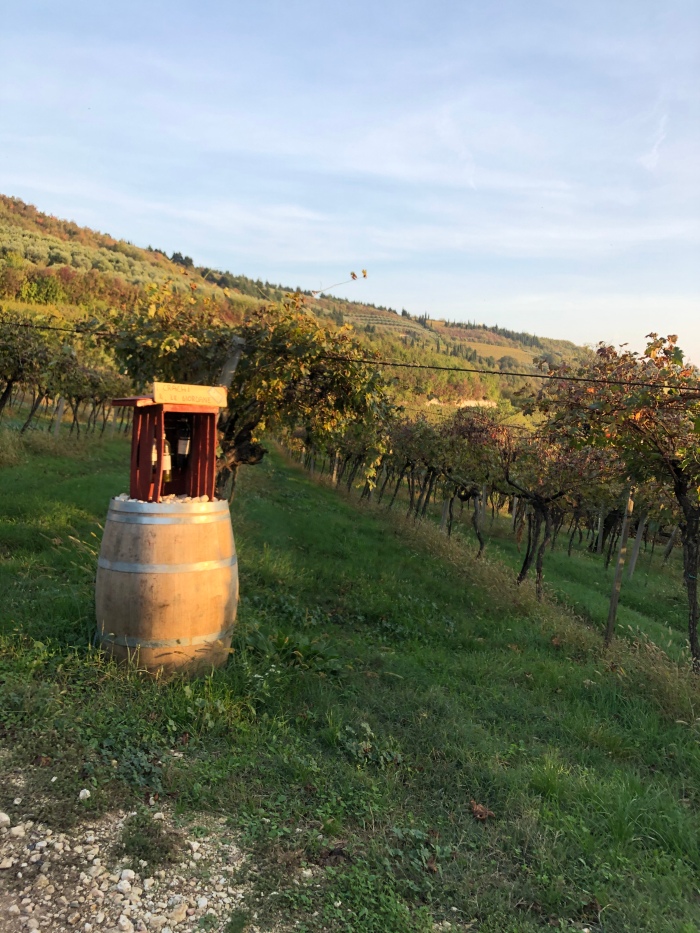 At the top of the hill we visited the fruttaio, the shed where grapes are dried for 3-4 months before being crushed and slowly fermented for Amarone. This can be a delicate process, highly dependent on the grapes and environment. Rot is a big danger.

Down in the cellars, we tasted five wines, with nibbles of local cheeses. We both really liked the 2013 Amarone, which will be even better in five years or so. Amarone can be a big fruit bomb, but this was nicely balanced. 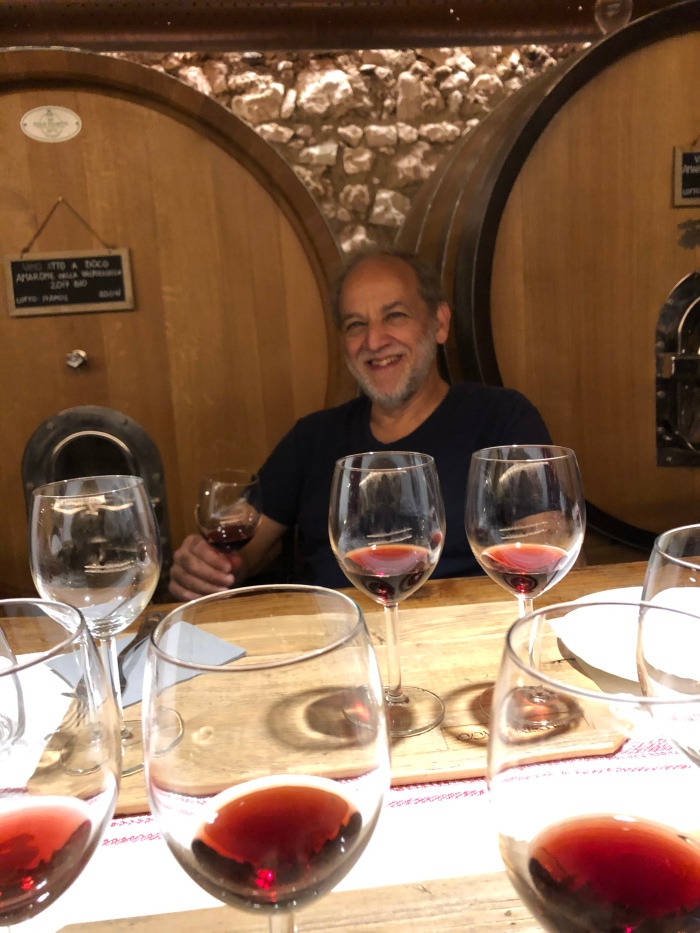 Dinner downstairs that night was a real treat. We did their five course tasting dinner, each course accompanied by their wines. First a little mouthful of bread made with wine, topped with a light cheese. Then stuffed zucchini flowers. Risotto with ginger, rosemary and a bit of licorice. Sounds odd, but delicious and worked well with the wine. Boned rabbit, topped with shaved black truffle, yes please. We’ll go apologize to the huge rabbits we saw in nice hutches on the hill tomorrow. I’d have never thought of cooking eggplant in red wine, but it too was great. Dessert was also excellent , a tart cherry and beet sorbet with local nut crumble. Ariana had noticed it was my birthday from my passport, so the chef brought out a little slice of cake with candle, very nice. About my only criticism was that the portions were too large for a tasting menu, we had to be careful to not finish everything, particularly the risotto. 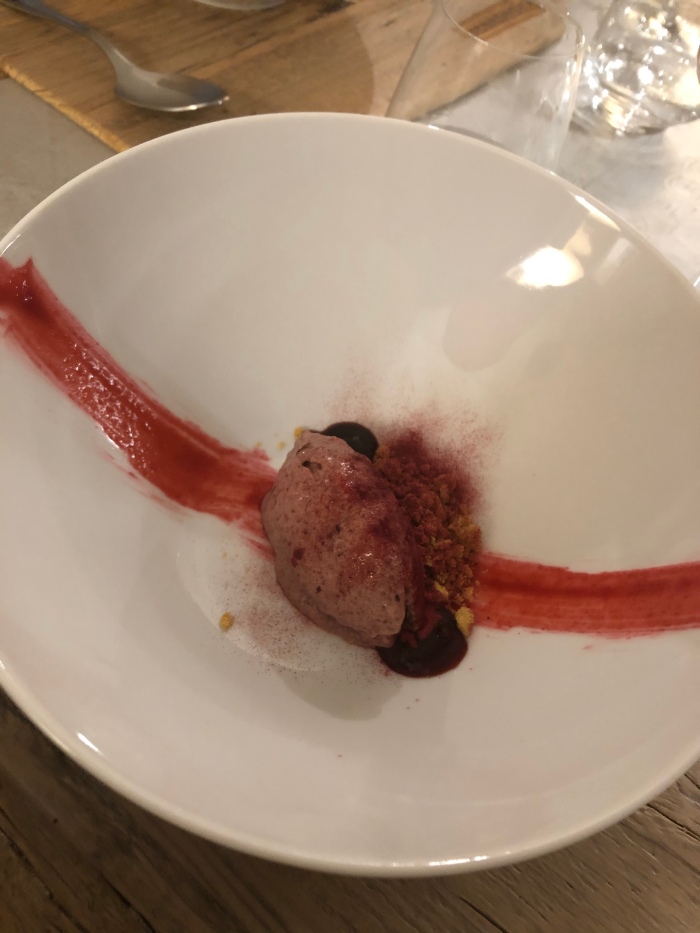 One thought on “Birthday Weekend-Friday”