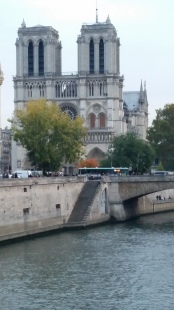 Tuesday morning we drove back to the TGV station outside Avignon, returned the car, and settled in for the three hour trip through the countryside to Paris. Hopped into a cab outside Gare de Lyon for the short trip to the apartment. Larry and the cabbie commiserated about the insanity of Paris drivers, just as we were “tapped” by a car in back of us. The cabbie hopped out, shrugged, and got back in to continue driving.

The apartment I rented is in the Marais, a little one bedroom that proved to be comfortable, though not without its quirks. The photos showed a counter eating area, which I thought would be fine for the few short days we’d be there. However, the counter was way higher than average, and us short people felt like six year olds climbing up to dangle our legs off the stools. Ah well, the sofa and coffee table will do for cheese and wine. Larry found the street noise at night in the bedroom a problem, though I slept well.

We had some cheese, bread and wine, then headed out for a long “we’re back in Paris!” walk, through the Marais, over the Seine and alongside it to the Jardin des Plantes, full of French families amusing their children, through the 5th, then swung back through the chic 6th. Attached to the fences in the parks were huge photographs with accompanying text, the one on the Jardin des Plantes on how a tribe in Africa lives off the forest, the one on the Luxembourg about bee culture around the world. A rest in the Jardin du Luxembourg, where the plantings were in deep reds and orange and we were able to snag two of the “good” seats. Then a walk to Notre Dame, where a bride was being photographed feeding the pigeons of all things. We were amused when they got stuck under her skirts, and everyone jumped in to shoo them out. Back to the Marais, passing by the oldest house left in Paris. 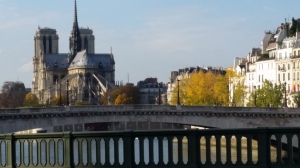 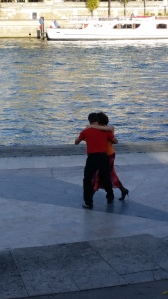 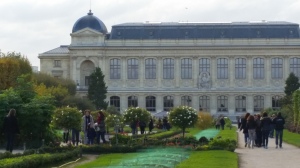 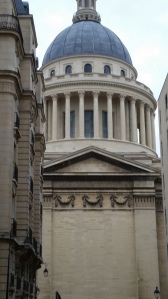 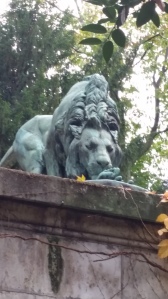 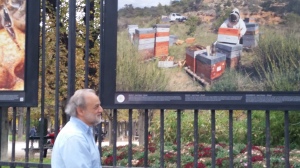 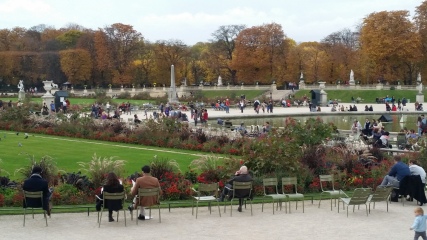 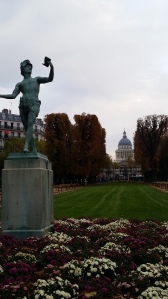 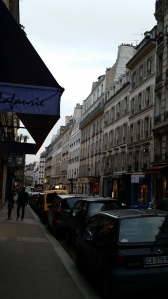 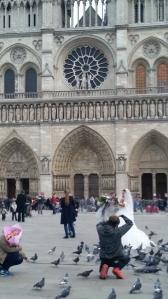 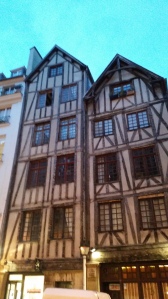 I was pooped, so didn’t want to cook or go out for dinner. I sent Larry out to forage for some  food à emporter.” He came back with some solidly mediocre Chinese food from a traiteur, but at least the wine was good.